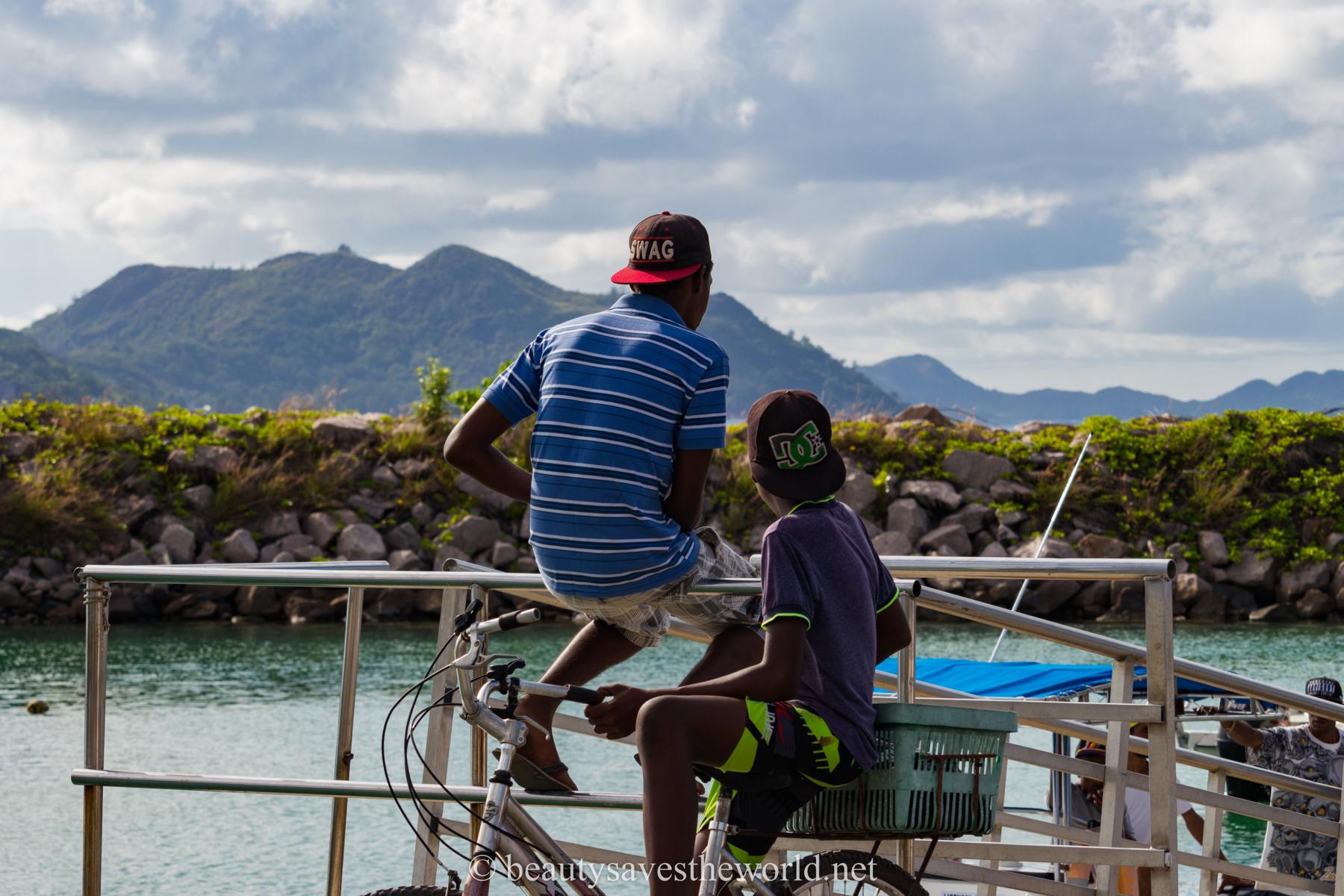 Welcome to paradise – The Seychellois

In my third part about the Seychelles I want to focus on the citizens of the Seychelles. I will share the experiences from my journey as well as some facts about the living on the islands.

First I want to start with the most valuable fruit for the Seychellian people – the ‘Coco de mer’ (Lodoicea maldivica). It can be found only on the islands Praslin and Curieuse, there is no other place on Earth where the trees are able to grow. The name ‘coco de mer’ comes from the first found fruits on the Maldives. At this time the Seychelles were uninhabited and it was belived that the fruits were produced by a tree in the ocean. In reality the fallen fruits from the trees on the Seychelles drifted some thousands of kilometers to the seashores of Maldives.

The fruits are huge. Their diameter reaches 40–50 cm and the weigh 15–30 kg, It is the largest seed in the kindom of plants. It takes about 20 years or more until the plant seed is fully grown. What is most weird is the appearance of the coconut. It looks like buttocks or female genitalia. No wonder it became a symbol of fertility. What is even more mysterious is the fact that the palm is dioecious and there is a male inflorescence that looks like… I’ll give you three guesses.

Here the Wikipedia article about this weird plant: link.  And here a picture of me holding the coconut seed:

Why I am telling you this? Because Coco de mer is so unique that it became a symbol for the Seychellois. After arriving on the Seychelles airport, you get a stamp of the coco de mer in your passport. There are images of this plant everywhere on the islands. You can buy postcards, jewellery and other tourist presents that showing the ‘buttocks’. It is highly restricted and controlled how many of the seeds are on the island. Stealing the seeds is strongly forbidden. It is possible to buy a seed but it is very expensive and comes with a certificate that you have to show on the airport.

History of the Seychellois people

The citizens of the Seychelles today speak mostly French, English and a language called Seychellois Creole, which is mostly based on French. Seychelles were first controlled by the French from the 1756 and the islands were named after Jean Moreau de Séchelles (Louis XV’s Minister of Finance). Before the colonization not much is known about the people. It is assumed that Arab traders passed by and the islands were mostly uninhabited. In the beginning of the 19th century the British gained control over the islands during the Napoleonic Wars. The Seychelles gained their independence from the United Kingdom in 1976 and became a member of the British Commonwealth.

During the colonization many African slaves were brought to the islands as well as Indian workers due to British colonies in India at that time. Today you see these multi-cultural influences in many ways. There is for example a clock tower in the capital of the Seychelles – Victoria (on the island Mahé) that was erected in memory of Queen Victoria in the year 1903. A lot of stores on the islands are run by people coming from India or China. In the cuisine you can find a combination of Indian, French, British and African dishes, too.

Some further information about the history of the Seychelles can be found: here  and here.

The life standard on the Seychelles is of course not comparable to European standard but they have the highest nominal per capita GDP in Africa. There is unfortunately also large economic inequality that is one of the factors. On the other side much effort is done to improve the social situation of the country and the Seychelles achieved many of the so called ‘Sustainable Development Goals’ (source: here). For example in 1980 the literacy level of adults was at 60%. Due to introduction of adult schools they increased the literacy up to 100% by 2014. In 2009 the first university was established on the Seychelles.

For the economy the tourism sector became an important industry. But the Seychelles also export a lot of frozen and canned fish, copra, cinnamon and vanilla.

The protection of the environment is one of the most valuable virtues of the Seychelles. They are in the top ten of the world’s countries that preserve its lands for threatened species. According to the statistics here Seychelles allocating 42% of its territory for conservation.

In the picture below you can see some of the workers for the nature reserve on Cousin Island. We were not allowed to go by the catamaran to the island. Instead we were transported with the smaller boats to the beach. The entrance to the protected islands is strictly regulated and you have to plan the visit if you want to go there. Over the whole territory of the Seychelles there were patrols that regulated if there are no illegal activities on the sea.

Now I want to talk a bit about our experiences on the catamaran. We had our own skipper called Jedi and a cook called Mr. Jazz on the boat. We shared the boat with another pair. Before we could get on board the boat was cleaned, fuelled and all the food and drinks resupplied by a small boat. All this was done by the two men.

I am really very thankful for all the work they done. The boat and sanitations were cleaned every day during our trips on land. Everything was very good organized. We reached all our nature reserve destinations on time. The snorkelling spots were fantastic.

Jedi told us that he is doing the work for several months without taking a break. Sometimes he gets lucky and can spend a night on Mahé where his wife and daughter lives but most of the time he doesn’t have a weekend or other free time for himself. During our catamaran tour Mr. Jazz was able to spend a night on La Digue with his family. But of course such working times are very different in comparison to our everyday life in Europe. We always have to be aware of this. You can see that living on a paradise doesn’t mean that you don’t have to work. Live is hard wherever you go. We have to keep in mind how fortunate we are to live in a well developed country like Germany where free weekends and 30 days of holiday are the standard.

Mr Jazz introduced us to the most amazing Creol cuisine. It was by far the best food on the Seychelles. The hotel on Praslin and La Digue can’t compete with him. There were always fresh eggs and toast for breakfast some noodles, rice or a lighter dish with meat or fish for lunch and a very delicious dinner including a desert. I am still thinking about his incredible teriyaki sauce and tried to find out the right recipe. But I still have no idea what the secret ingredients are…

On the image below you can see an example what was for dinner. Jedi fished some barracudas from the Indian Ocean that were directly prepared by Mr. Jazz in the most delicious way.

I haven’t mentioned before that many products we are used to have to be imported. We haven’t seen much cheese or milk for example therefore I assume that cows are rare on the Seychelles. Instead I have seen that chicken are cultivated. In addition to this you can find bananas, maracuyas, mangos and other exotic fruit in almost every garden of the Seychelloises.

The beaches of the Seychelles are not comparable what you see for example in the very touristic Spain. I am very happy about this in the way that you are not overwhelmed by souvenirs, reserved beach chairs and way too many people. It is calm and quiet. But sometimes you also want to have maybe a drink and don’t want to spend hours to get there. There are some people that provide you with this wish. On the picture below you can see a woman that mixed us great maracuya cocktails. But you can also get some freshly opened coconuts there, too.

Because on La Digue bicycles are the main transport vehicle for tourists we have seen bicycle renting on many places. And the local people have bicycles, too. I have to admit that the island is small but quite hilly. Some beaches can only be discovered by feet. But in general I think the Island La Digue is the most familial island where you feel very welcome. Maybe it is because the island is so small and the tourists and the local people live close together?

In the end of this article I wanted to show you some pictures of playing children. I have to admit I am a bit jealous. Children that grow up under such beautiful nature have probably a different view of the world. A more natural probably. In the most industrialized cities the children often don’t play outside anymore. I think this is unfortunate because we need the experience of nature and regain new energy from it. We need the feeling of awe to keep going with our civilized lives.

This was the last of the three articles about Seychelles. You can find the previous articles here:

Welcome to the paradise – the Seychelles

Welchome to the paradise – Wildlife of Seychelles