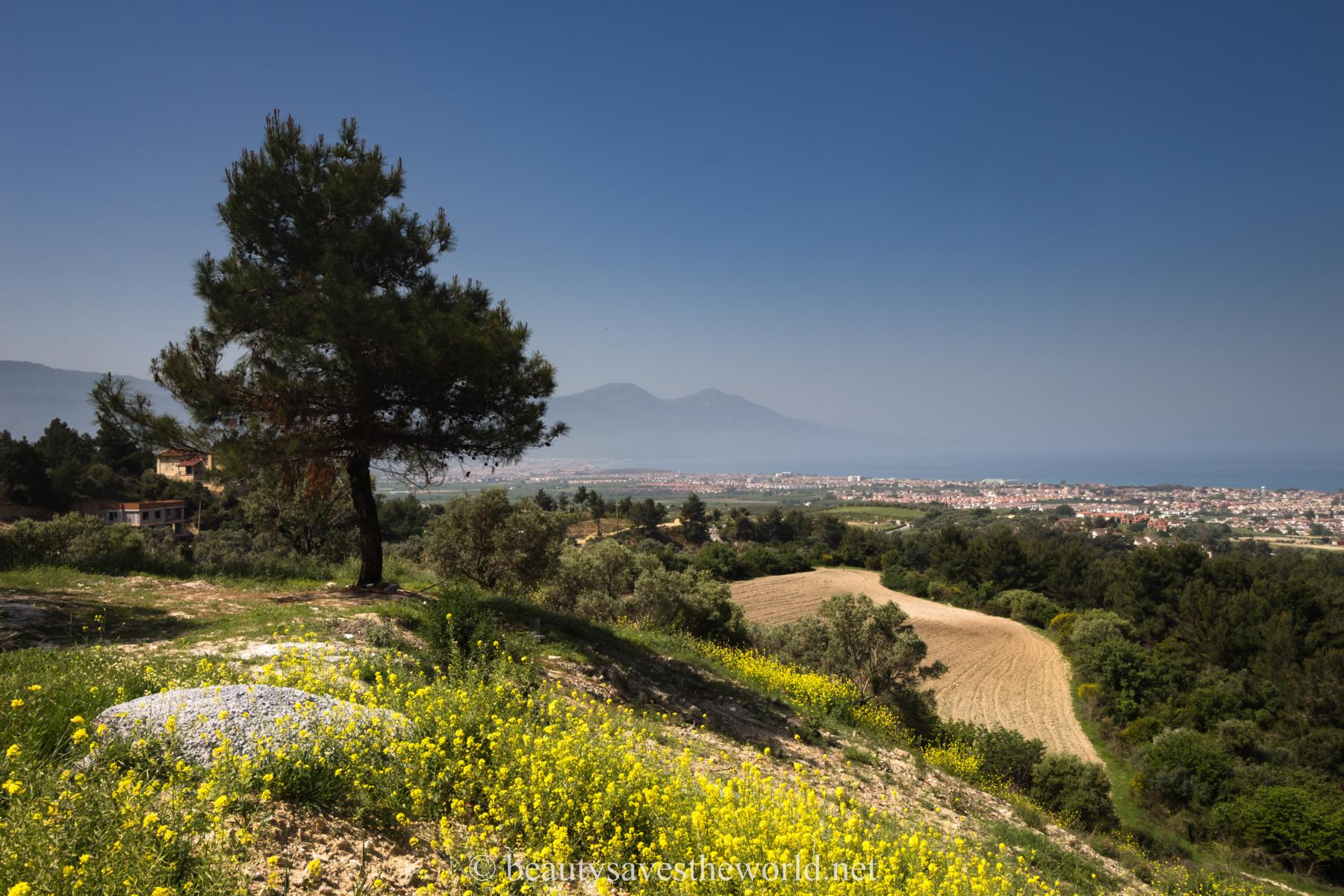 Along the Aegean Sea – Traces of Ionia

On our holiday in May 2017 we visited several Turkish and Greek villages near the Aegean coast. I want to show you some impressions of this area. Me and my boyfriend visited the city Ephesus in Turkey, which was an ancient Greek city. There are still some remains from the ancient monuments from several epochs. One of the most famous monuments was the Temple of Artemis, that was one of the Seven Wonders on the Ancient World. Unfortunately the Temple was destroyed and there are no remnants from this building. But the facade of the Library of Celsus is still in a good shape and was built during the roman empire as well as the Amphitheatre that was build directly into the slope of a mountain. It is quite amazing how much history this place embodies. Ephesus was also a central place for Early Christianity. The legends say that the Virgin Mary spent the last time of her life in Ephesus. There are some remnants of her house and also ruins of the Church of Mary.

Not far away from Ephesus, there is a little Greek village Şirince. It is believed that the village was settled by freed Greek slaves. Today the most residents are christian Greeks. The houses of this village look really charming and haven’t changed since 18th/19th century.  There are many narrow alleys that can take you back in time.

Another outstanding place we visited was the Nesin Mathematics Village near Şirince. The place was funded by donations. It is a small village where pupils and teachers live together for the purpose of mathematics. The place is on top of a hill and is hard to reach. The villige is cut off from the rest of the world. There is no TV, no music, no distractions – only beautiful landscapes and mathematics. The teachers teach maths to interested students at any level. From primary school to university level there are short courses that are offered during the summer season. The teachers are doing voluntary work and teach for free – only accomondations and meals for them are paid from the donations.

You can find more infromation on the Nesin Mathematics Village Home Page.

Kuşadası is a more touristic city. It has beautiful beaches and really clear turquoise water. There are several bazaars for tourists and also for local people where you can buy fresh vegetables, spices and fruits. We were there mostly to take the ferry to the Greek Island Samos.

It takes only about one hour from Kuşadası to Samos. We spent one day on the island. There are these typical Greek houses, beautiful beaches and of course much history 🙂 Phythagoras for example lived there.

One of the coolest things to see was the large Kouros of Samos in the Archaeological Museum of Samos, the city on the island. It is about 4.75 meters in size (about 15.6 feet) and and was created in 580-570 BCE. It was found on the island together with the Heraion of Samos. The Heraion is sanctuary for the goddess Hera. Because of the strong Hera cult you can find much more objects in the museum that relate to Hera as well as some of the remains from the temple.  Also other ‘kouroi’ are exhibited. The Kouros is a statue that represents a young man standing straight with arms hanging by his sides. The statue has normally clanched fists and the legs are one in front of the other. It is a popular type of sculpture among the ancient Greece and definitely worth a visit in Samos.

Not far from our stay there is the Dilek Peninsula-Büyük Menderes Delta National Park. There is only one street for cars that lead to three different bays where people can relax on the beach. The street has a dead end and it is not allowed to drive through the park. The most area of the park is uninhabited for the protection of several species of mammals, birds, reptiles and fishes. It is allowed to cross the park by feet or by bike from north to south aross the mountain Mycale, which also calls Dilek Dağı in Turkish language. This mountain is also referenced in Homer’s Iliad (Book II).

In the park there live rare spacies like jackals, lynx, caracals and white-tailed eagles. We didn’t spot any of them but we fed a wild boar near the coast. We talked to the director of the park. He told us that the wild boar is a female with the name ‘Pakize’.

On the other side of the national park by going the way from north to south there is the small Greek village Doğanbey. This village reminds from architecture the village Şirince. By going further west along the coast we found the Port Karina that is connected to a nice fish restaurant. The weather was not perfect, but the mud on the coast and the colour of the sky created an interesting picture:

Last but not least I want to show you an image of a place in Davutlar on a hill, where we went for breakfast. The panorama view was amazing there. In the misty background you can see the island Samos and the mountain Mycale that appear like they would float on the blue sky.

This is also the place where our relatives live and we will be there for sure more often. I already showed you some of the pictures I took at the coast nearby: here